Wow! Students are exhausted after 48 hours of pure Maths driven determination to succeed. After competing in World Maths Day 2010 students received certificates of participation and a feeling of satisfaction that they participated in a very cool world wide event. 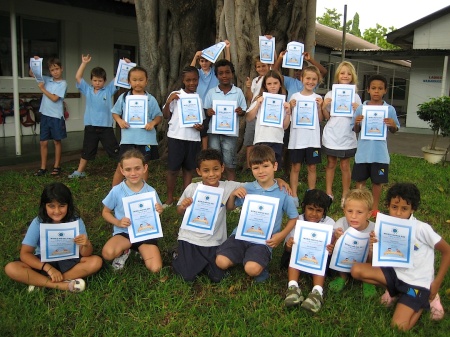 After reviewing our result, students reflected upon their experience:

World Maths Day was so much fun! We enjoyed competing against other students from other countries and sometimes we even competed against other students from our own class. We felt that we all learned more Maths and became a little better at solving Maths problems. We enjoyed playing the games both at school and at home. We worked together, we did our very best and even though we did not reach our goal of 20,000 correct answers, we came very close AND we had fun! We can’t wait until next year and until then we are going to continue practicing in order to get better at our Maths.

“World Maths Day was so much fun! We almost reached our goal, we were so close. I tried my best to help my class reach our goal.” – Said

“You can dress yourself up (your avatar) and play with other students from other countries. Our teacher was even playing with other teachers! In the beginning it sounded kind of boring but it was so so fun!” – Aliyah

“World Maths Day was by far the best Maths I have done in my life! I am going to keep playing and practicing. I am so glad that we got to play and learn at school and at home. I can’t wait until next year!” – Talin

Thank you World Maths Day – for helping us learn!

Students in Mr. McKillip’s class will be competing in this year’s World Maths Day Challenge!

What is World Maths Day?

“Students play at home and at school against other students around the world in live games of mental arithmetic. Each game lasts for 60 seconds and students can play up to 500 games, earning points for each correct answer. The students who answer the most questions appear in the Hall of Fame. Students cannot select their level but will move up as they progress.”

“This is a truly unique world event and a fantastic way to promote numeracy. Past results show that students will make significant improvements in their mental arithmetic skills and have fun in the process.”

Today during Maths students logged in to the official World Maths Day website to test out their login, password and do a bit of practice. Students are welcome to log in and practice solving Maths problems from home. Be sure to check your child’s Link Book for their individual login and password.

Over the last few weeks students have been studying about 2D and 3D objects. We started this current Maths unit looking at points. We discovered that we can label points with a letter from the alphabet and then we can connect these points using a straight edge to form line segments. Line segments can be parallel (meaning they never touch one another) or not parallel.

We then learned that if we connect line segments to create a closed figure we can create polygons! There are many kinds of polygons – some of our favorites are the hexagon, octagon and the always popular trapezoid and parallelogram. What is your favorite 2D object? 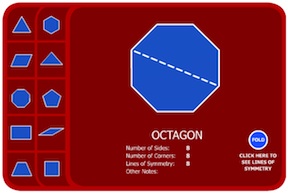 We have been using Innovations Learning’s Shape Facts application to help us learn more about 2D shapes and lines of symmetry:

“When you can fold a shape in half, and one half exactly covers the other half, we can say that the shape is symmetrical. And the fold line is the axis of symmetry.

Some shapes have lots of different axes of symmetry, some have only one, and lots of shapes are not symmetrical at all.” 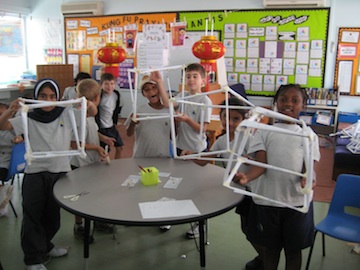 After learning about 2D and 3D shapes/objects, we decided to put our knowledge into action. We used our recycled paper to create 3D rectangular pyramids and cubes. We had a lot of fun making 2D shapes and then transforming them into really cool 3D shapes!